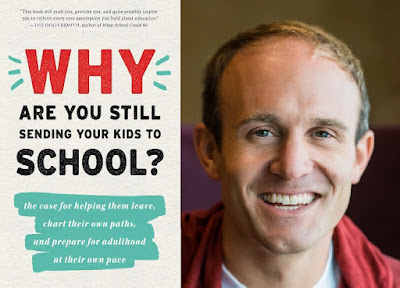 Today, Blake Boles released his new book “Why Are You Still Sending Your Kids to School.” It makes me think back to the first time I learned about Blake through his podcast Off-Trail Learning sometime around September of last year. The podcast wasn’t specifically about unschooling, which is what I was looking for, but after listening to the first episode I realized it was one of the dialogues I really needed to hear. Basically, each episode involves an individual that has undergone some form of self-directed learning and is either amidst figuring out their life or has arrived at one of their many destinations. (Boles extends this theme in his joint project Grown Unschoolers that details the profiles of those past the age of 20 that have gone off the beaten path to education.)

Those alternatively educated are in such the minority that as a well-intentioned parent (and likely similar to anyone first dipping into unschooling), I had my reservations and worries about how long this sort of pedagogy would work for my son (e.g. “Is this sustainable/responsible through high school while my son misses out on trigonometry and calculus?”). Since first hearing the podcast I’ve been looking to read one of Boles’ books. I must say I’m pleased to have heard his podcast first including his soft voice, peaceable interview style, and thoughtful interjections. His words have a genuine feel and he is very respecting of and sensitive to others’ chosen experiences regardless of their age. Actually, the more I think about it, I realize the difference between conventional schooling and alternative education is in the level of respect for and sensitivity to children’s experiences. Children have their own opinions and values and truly creative and impassioned ideas of what to do with their time—and it likely doesn’t involve being hustled from lesson to arbitrary lesson for most of their childhood and adolescence.

In “Why Are You Still Sending Your Kids to School,” Boles is very objective and careful to include the worries and fears of parents likely unexposed to the specifics of homeschooling, democratic free schools, or unschooling. He has a way with words and is considerate of all angles of a discussion—even those that don’t endorse the book’s title (to the point that I felt I needed to hear the scholars who challenge the truths I’ve built over the past year!). As someone who has been conventionally schooled right through to a Master’s in Education, discovering self-directed education has left me simultaneously invigorated as well as shell-shocked (it is that different from the culturally-communicated norms.) As an avid reader of many alternative education-related books over the last year, it was refreshing to experience how Boles systematically presents perspectives from theorists and scientists alike as well as his own interpretations (and critiques!) of many of the common giants of self-directed education (Llewellyn, Gatto, Holt, Gray; they’re all in there). Boles communicates the realities of self-directed education, “warts and all, for parents who want the straight truth.” In fact, this is the first of his books with the parent as the target audience.


This book is a treatise for: a) parents curious about alternative-education, b) parents of anxious, stressed, disengaged, or bored (or insert your own adjective here) children in school, and c) parents that see the light of alternative education but aren’t confident that this path leads to success. It’s also for parents already in the know (and likely knee-deep in the practice of one of these alternative methods) but looking for inspiration, real-life examples, and guidance—whether a child’s path involves college now, later, or possibly never. Organized with short, digestible sections in each chapter, the book is a detailed manual to understanding that the society we live in has a hegemonic yellow brick road to supposed success but most importantly that that path is one of many choices for your child. Boles posits, “Did we turn out okay because of school or in spite of school?” and is very forthcoming in stating that there truly aren’t many studies that undertake this question; there really isn’t a “control” group to conduct a valid experiment. Many children do “win” at the game of school, but for those that don’t (and even for many of those that do) they would be relieved to learn that a public or private grade-school education isn’t necessarily a prerequisite to college, a good job, or happiness. In fact, my experiences with teacher education science and theory (paired with the reality of the restrictions of conventional schools) place me on the “children turn out okay in spite of schools” side of the spectrum. What’s helpful is that Boles is adept at giving examples of how it all has worked for specific individuals navigating alternative education.

One of the discussions in the book—hitting upon the pinnacle of my current interests in the matter—is navigating the college application process. Through Boles’ thorough rundown, he conveys the various tips and tricks to marketing the advantages of a child’s self-directed learning to colleges' admissions. (Quite frankly, the self-directed education engenders an entrepreneurial spirit that most college applicants are sorely lacking!) And honestly, what are the hidden economics of college? Does it pay out in the end? For everyone? For most? I also learned a lot about “intensive parenting” from Boles' book and how it negatively affects our upbringing in today’s educational climate. Intensive parenting encompasses the contemporary ills of helicopter parenting and the increasing paranoia about children’s safety. But Boles digs even deeper; he discusses the widespread misconception that, through coercion, a parent has direct control over a child’s success and happiness (see: Judith Rich Harris). Can a parent actually push a child to good grades, a good college, and a good career? How often could such coercion turn out as a genuine and desirous “improvement” for the recipient? And yet, how often is this myth repeated through countless customs, manifested in other forms, and allowed to proliferate in our culture?

Richly fortified with studies, books, and articles, Boles’ objective book rallies us toward a vision that offers a lot to digest. It makes us reflect on our own parenting practices and values in life. In this rally, Boles sets expectations for what success means when following a child’s passions. His insight and musings communicate a holistic and modern perspective that couldn’t be gained from just one of the authors discussed within...or even a few of their books together. His meticulousness plays out in the presence of the “Notes” section placed after each chapter which, beyond providing a plethora of sources for his in-chapter discussion, often expands the conversation and allows the reader to follow their own interests through books, articles, and website links. Whether it sounds like it or not, the book is likely for you. Whether or not you’re lured down the proverbial rabbit hole of alternative education—and whether or not you have the capabilities to follow through—you will learn and grow from this book.